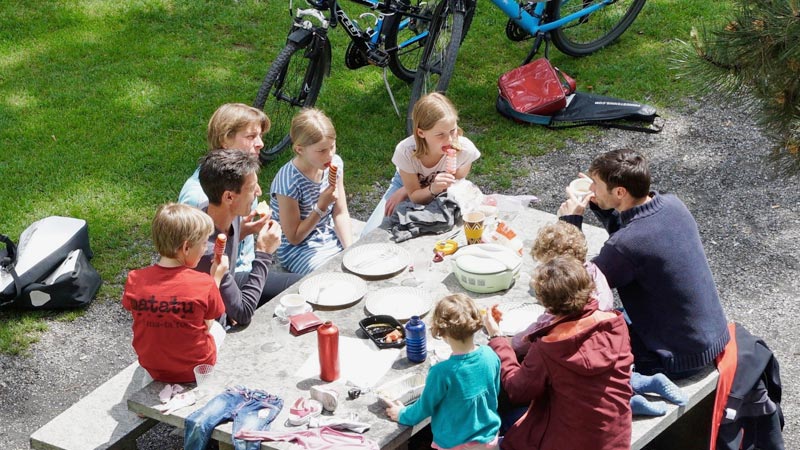 Most shops are shut on public holidays and a great many people have the day off work. In this way, public holidays are an additional feature of the work-rest pattern predetermined by Sunday as a day of rest, a feature that has its roots in the Christian faith that has shaped Germany and indeed Europe as a whole.

After the Second World War new political divisions appeared in Europe, with the so-called "Cold War" between the communist countries of Eastern Europe, dominated by the Soviet Union, and those of Western Europe led by the USA. As a result of these divisions, the German Democratic Republic (East Germany) and the western-oriented Federal Republic of Germany (West Germany) were founded in 1949. The old capital city, Berlin, was divided as well.

The faster-growing prosperity and greater political freedoms enjoyed in democratically governed West Germany induced many East Germans to flee to the West. As a result, East Germany built a wall with barbed wire and a death strip to literally divide Germany and Berlin in two. This made the division of Germany a seemingly permanent feature.

For decades this looked like a permanent division. In East Germany the communist ideology claimed the place previously taken by religion. It was mainly Christians who were oppressed, even though the Christian faith was firmly anchored in Germany’s cultural traditions. Nevertheless, Christians in East Germany stayed true to their faith, even in times of oppression by the state. That was one reason why the main places where resistance emerged were churches. The peace prayers in St. Nicolas church in Leipzig and many other towns and cities of East Germany became a key feature of the resistance, which ultimately led to the fall of the Wall in 1989.

Horst Sindermann, an East German politician, had this to say later: "We were prepared for everything – except candles and prayers." After the fall of the Wall, people soon began calling for Germany to be reunited, which then took place on 3 October 1990. Each year on this day, German Unity Day recalls this special event and Christian thanksgiving services are held.

1 May is celebrated as Labour Day in many countries. Its origins go back to 1886 and the general strike by workers in the USA who were protesting against their bad working conditions. They had to work 12-hour shifts for little money and were demanding an 8-hour day. This general strike lasted several days and was accompanied by violent riots. A bomb went off and several workers and policemen lost their lives.

Since 1890 this event has also been remembered in Europe, with strikes and demonstrations in many big cities as workers fought for better working conditions – in many cases against the concerted efforts of the bosses and governments. A powerful labour movement grew up in Germany, too, and with the support of trade unions demonstrations against exploitation and oppression took place on 1 May. That is why since the early 20th century, Mayday has been an official public holiday where most people have the day off work.

Nowadays, not so many people join in these Mayday demonstrations because, for most people, the working conditions have improved dramatically. This public holiday is more likely to be an occasion for a day out with the family.

In rural areas of Germany there is still a tradition on 1 May of erecting a maypole, usually the long trunk of a birch or pine tree decorated with colourful ribbons and often accompanied in the villages by festivities with brass bands and "dancing into May".

Even though New Year’s Eve and New Year’s Day come soon after Christmas Day, they are not Christian holidays. In earlier times, people thought they had to drive away the evil spirits at the beginning of a new year. This is one German tradition that has nothing to do with the Christian faith. Fireworks and bangers are set off to drive away these evil spirits in a custom still practised today.

Nowadays, New Year’s Eve is usually celebrated with family or friends to welcome in the new year. People have meals together, play games or just have a nice relaxing time. Some people prefer wild parties, often with too much alcohol. Lots of people formulate new year’s resolutions, celebrate with a glass of sparkling wine at midnight and wish each other all the best for the coming year. Christians often wish each other God’s blessings too.

Fireworks and bangers are only allowed to be set off on New Year’s Eve amongst family or friends, i.e. as a private celebration. The afternoon of New Year’s Eve and the whole of New Year’s Day are public holidays where most people don’t have to work and shops stay shut.

You can download this article in your language as a pdf-file: